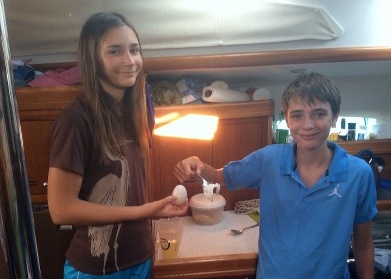 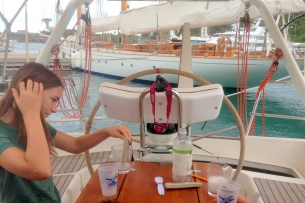 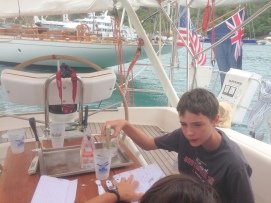 Most of us are familiar with the fizzy bubbling action that occurs when vinegar and baking soda are mixed, but did you also know that this reaction causes a temperature drop in the liquid? Owen and Megan have just finished a unit on chemistry that culminated in two experiments to discover the interaction between acids and bases. While some homeschoolers use a solution of boiled purple cabbage for their litmus tests, Strider’s scientists have a hand-held pH meter on board, which they also have been using to test water quality in each anchorage (more to come on those findings). Perhaps even more dramatic than effervescing fluid is the effect that vinegar (acidic) has on an eggshell (alkaline). Read their lab report for the full results.

What happens when you place an egg in a weak acid?

If an egg is placed in a weak acid, there will be some kind of change that shows a chemical reaction, such as bubbling (like we saw in the other experiment) because the egg shell is a base.

Materials: List the materials to be used in the experiment.

Day 1: The vinegar egg sank to the bottom of the cup. Later in the day it was covered in tiny bubbles. The water egg sank, but had no bubbles on it.

Day 2: The vinegar egg started floating and was still covered in bubbles. It also started expanding slightly. The shell felt a little bit squishy. The water egg remained the same as on Day 1.

Day 3: The vinegar egg sank again, was still covered in bubbles and expanded even further. The shell felt squishy. The water egg remained the same.

Day 4 (final day): The vinegar egg doesn’t have any more bubbles around it and it felt extremely squishy, like it might pop if poked by something sharper than a finger. The water egg remained the same. Then we did pop the vinegar egg and the shell was a gooey mess. It could not hold the egg together.

During the four days, the eggshell collapsed. The pH of the vinegar cup was higher than the pH of vinegar. I think this is because the eggshell which is a base absorbed some of the acid. Water has a more neutral pH, so the effect was not as much.  Maybe the vinegar egg expanded because, since the eggshell was soft, liquid could get in there. I don’t know why the vinegar egg rose and then sank. These results supported my hypothesis, but there more results than I predicted.

Evaluation (ways to improve the experiment and questions that remain to be answered):

1 thought on “Science Class Aboard”