Note: See Owen’s and Megan’s pages for their photo essays about Anse Bourg!

We have thoroughly enjoyed Anse Bourg, Les Saintes, just south of the island of Guadeloupe.  This is a place where, for a several centuries, different cultures have fought, done business, and vacationed with each other.

On our first day we visited Fort Napoleon, which commands the harbor from a towering hill.  From here in 1782 you could have watched Admiral Rodney’s fleet defeat de Grasse’s, reaping vengeance for the French victory at Cape Henry six months earlier (the pivotal moment in the Battle of Yorktown).  By 1867 construction was complete on Fort Napoleon.  Why name a new fortification after a defeated dictator?

By then Napoleon’s nephew was Emperor of France!  How do the French now reconcile this militaristic remnant from their past with their far less truculent present?  They have built a botanical garden on top of the ramparts!

Meanwhile, Megan continues to develop her diving skills, swimming deeper and holding her breath longer.  Perhaps this is because she is the only one in the family who insists on a daily bath and shampoo at the transom.  Or perhaps it’s her love of sea creatures.  Here she holds “StarMe” (which she named for a Pokemon character).

The Saintes offer an easy mix of French creole food and culture, on the one hand, and beautiful hikes, on the other.

Did you notice Strider between Owen and Megan in the photo above? 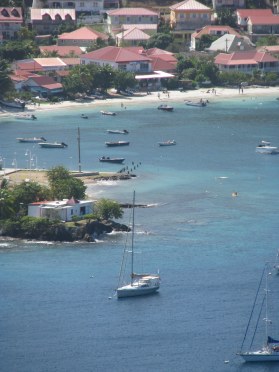 And here’s our home from street level…

Tomorrow we hike Chameaux, a 1044′ peak overlooking the harbor, for some final pictures before departing for Dominica – likely on Thursday.