Dominica is a young island, with active volcanos and steep terrain.  This is the key to the island’s beauty: mountains force the moisture-laden trade winds up slope, which results in nearly continuous precipitation at the peaks. There are 365 rivers, some of which plunge over spectacular waterfalls, and an abundance of rain forests, tropical flowers and fruits.  However, while we wanted to explore Dominica’s interior, we were intimidated by the thought of driving a rental car on the “wrong” side of twisting, mountain roads. We decided to hire a guide.

In Portsmouth we worked mainly with Paul Honore, a natural-born educator who speaks Creole, French, and English, teaches karate, and plays electric guitar for the Catholic church choir.  Paul shared a wealth of information about creole culture and island plants, much of which he learned from his grandmother.

In Roseau, the island’s capital in the south, we hiked with Sea Cat, an adventurous spirit with a loud laugh and long braids. He was the first to leap into every river we crossed.  With these guides we hiked to mountain waterfalls and small villages.  We sampled creole food, watched local farmers work their crops, climbed fruit trees, and even ate a Rastafarian lunch from a calabash bowl.

We enjoyed many conversations with Dominicans grateful for our business and eager to tell us about their home.  We discussed food, politics, education, religion, and the local economy.   In keeping with “island time,” many of these conversations were long and earnest, often resembling a sermon.  If there was one underlying sentiment, it was this: Dominicans are a proud, dignified people who love their island, but they find it hard to make a living.  Everyone keeps a bountiful garden, so no one starves, but they struggle to get beyond subsistence.  Young people often emigrate to other islands for a decade or two, hoping to make enough money to return, buy some land and build a house.  Surprisingly, we never sensed resentment or jealousy directed towards us Americans.  Instead, Dominicans often greeted us with the same greeting they use with each other: “I see you,” or more colloquially, “I be seeing you,” a beautiful expression that conveys respect for the other people’s humanity.  The phrase, like so much of creole culture, comes from Africa, not the movie Avatar.

Megan buys sugarcane at the market.

Dominica’s outdoor markets are overflowing with fruits, vegetables, and strange hairy tubers.  We tried them all.  We enjoyed the sweet potatoes and pumpkin, both more flavorful than their North American versions.   For our salads we found that Christophene adds a crunch superior to a cucumber but more refreshing than a carrot.  We reveled in pungent ginger and celery, both superior to the versions in the states.  And we indulged in tropical fruits.  Our new favorite is Soursop, but what’s a day without a grapefruit, a mango, a guava, and an avocado? On the other hand, while we tried the starchy staples – breadfruit, yams, dasheen (taro), and eddo root – and they keep well in the bilge, we can’t say we loved the flavor.

We were fortunate to share Dominica with new friends.   We met some sailors from the Salty Dawg Rally, including John and Debbie from Kalista and Matt and Karen on Gypsy.  We made new friends Robert and Revel from Australlia on Intrepid Elk, Adrian and Jax from the UK on Vagaris, and Americans Julie and Rick on Archer.  We look forward to following their journeys online and finding them again in some far away anchorage. 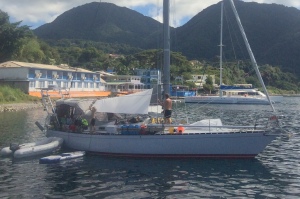 Best of all, we finally connected with another “kid boat” – nautical speak for a boat crewed by small sailors who enjoy Legos and Harry Potter.  Owen and Megan were so happy to meet Peter, Simon, and Andrew from Alchemy – and we to meet their parents, Sarah and Barrie North- that we anchored with them for more than a week in Portsmouth and Roseau.             We shared hikes and swam together under waterfalls, and it was amazing how the kids’ sore muscles were quickly forgotten, and the complaints ceased, with buddies to share the adventures.  The young sailors leapt from each others boats, baked cake together, and played card games late into the night.  There was even a sleepover on Strider.  Life was pretty good for the parents, too, especially once we took the step of segregating ourselves on the “adult boat” in the evening.  We found that we share much besides a love of sailing.  It was a sad morning when we waved goodbye to our new friends, slipped our mooring, and set sail for Martinique.  We hope to see them soon, whether in the Caribbean or back in their home state of Vermont.

Meanwhile, here are a few more pictures from Dominica (click photo to view):

Megan in the British fort at Portsmouth

Simon hoists the Jolly Roger on the backstay

Colin in the rain forest