Owen wishes he could work at the Grenadian chocolate factory.

It’s hard to put a finger on Grenada’s special appeal.  Dominica has more rugged beauty, Martinique better food, the Grenadines better snorkeling, and Antigua better rum.  Grenadians are friendly, yet so are people on many islands.  Yet Grenada rates highly in all these categories, and this balance makes it exceptional.  As we heard many sailors say, “Grenada is just so easy to enjoy.”

Riding the #2 bus with a few friends.

At the wheel of each “bus” is a hard working entrepreneur with his business name in the window.

Most cruisers anchor their boats in one of Grenada’s many beautiful bays on the south coast.  Here they meet other sailors, participate in daily social events, whether dominos or beach parties, and share information via the morning “cruisers net” on the VHF.  It would be easy for a sailor to lime away in this expatriate community without getting a glimpse of the real Grenada.  Fortunately, few actually do this, because getting around the island is so easy.  On many days a cruiser-organized shuttle offers rides to local markets or community events.  Otherwise, catching a local bus is cheap and easy.  You simply walk down the road until the right-numbered bus drives by.  You can flag it down, but no worries, the “conductor” will already be hanging out the passenger window, motioning you to jump aboard.  For less than $1 U.S., you can go just about anywhere with a minivan full of friendly locals.  There’s usually an empty seat; if not, people crowd in anyway and perch one cheek on a seat.  Worst case, you wait for the next bus, which comes within a minute or two.  With Soca music blasting so loud your whole body vibrates, your van makes its way through Grenada’s streets, discharging and picking up passengers with incredible efficiency. 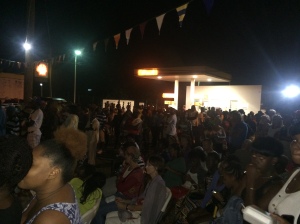 A big turnout for the Tivoli Drummers!

For nearly three weeks in Grenada we rode busses, hired tour guides, and walked a great deal, trying to see as much as possible.  Our favorites included the Tivoli Drummers, a collection of drumming, acting, and singing performances by community artists from across Grenada.  They performed at an open-air stage in a clearing across from the gas station of a small coastal town.  The audience consisted of twenty-odd sailors like us and about 320 local Grenadians.  We knew this was an authentic scene when they took a break from the music to allow a committee of representatives from local towns to perform a skit about AIDS awareness and domestic violence prevention.  It was smart, well acted, funny, and decisively not politicaly correct.  The audience loved it.

Our favorite restaurant was Aziz’s schwarma stand, an evening hang out for the students from St. George’s university.  Aziz cooks delicious, affordable, Middle Eastern food with an American-Caribbean twist.  Born in Syria, raised in Trinidad, and a 15-year resident of the United States, Aziz is savvy and cultured, but above all he is a a good businessman and a really likable guy.  We talked with him one evening about his family in Syria.  I asked Aziz if he is concerned for their safety, and he explained that he worries, but his oldest brother will never leave because he refuses to give up their land, a large grove of olive trees in the family for generations.  His other brother will also never leave, because as a highly respected doctor he cannot turn his back on his fellow Syrians when they need him most.  We wished Aziz the best of luck for his brothers, and we hope to see him soon. 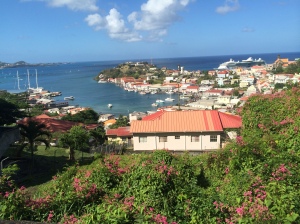 St. George’s, the capital, and the fort where a handful of Cubans and members of the socialist government made a stand against America forces in 1983.

As an American I could not help but wonder what Grenadians think of the invasion of their country 31 years ago by American forces, so I asked some people I met.  It was explained to me this way.  No one believes the American line that the operation was a “rescue mission,” because according to Grenadians the American students were never in danger.  However, only a small, radical minority views the operation as an unjust invasion and a counter-revolutionary coup.  The majority view the operation as an “intervention” – the exercise of American power to preserve American interests with an outcome that was also in Grenada’s interests.  In other words, they don’t see the American invasion in romantic terms, but overall they think it was a good thing.  I was struck by the maturity and hard-headed realism of this viewpoint.

The highlight of our visit to Grenada was the day we spent touring three “factories,” which produce three quintessentially Grenadian products that also happen to be favorites of ours: nutmeg, chocolate, and rum. We try to give you a sense of the action with the photo gallery below, but understand that these places must be smelled and tasted to be truly appreciated. 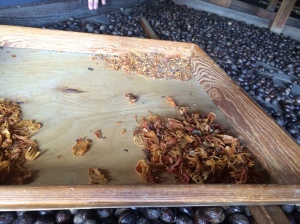 Sorting mace (the flower) from nutmeg (the nut) for drying. 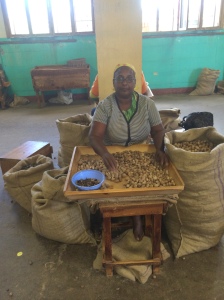 Sorting nutmeg and bagging for shipment. 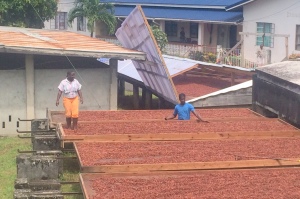 Drying coco beans, after they have fermented, in preparation for roasting.

Crushing sugarcane with a watermill, still going strong after 200 years in operation.

The crushed and dried cane provides the fuel to boil the sap.

Hardwood fuels the still. Feeding the fires is a hot job.

The rum is distilled repeatedly until it reaches 150 proof.

(Colin, not Megan) sampling the final product. Do not drink this rum near an open flame.