Our apologies to friends and family, but internet connections were spotty in the BVI.  More posts are on the way…

We were scheduled to depart Hampton, Virginia with the Salty Dawg Rally on November 2nd.   We were delayed one day by a powerful low pressure system off Cape Hatteras, but once it moved northeast over George’s Bank and the Canadian Maritimes, forecaster Chris Parker declared a “weather window” for boats departing Chesapeake Bay for the Caribbean.  Strider set sail on November 3rd with some 60 other boats, clearing Hampton Roads with crisp autumn skies and a fine westerly breeze. We passed  Cape Henry and reached southeast along the outer banks. During the night we marked our progress by lighthouse beacons in the distance: Currituck, Bodie Island, and finally Cape Hatteras, our last hint of land for the next 1400 miles. 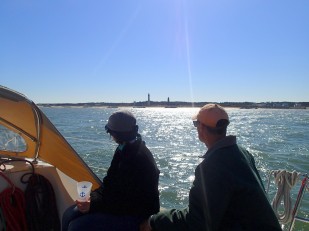 For this passage Owen and Megan decided to stay ashore with family members, and two hearty sailors joined us in their place.  Our insurance company had required that we bring crew members with offshore experience, and we found this in spades.  Blaire’s uncle, John Kiley, brought a lifetime of blue water sailing, including a full circumnavigation.  Ben Yeager, one of our former Taft students, was already a veteran offshore passage maker at 26 years old, not to mention an expert fisherman.  We were ready, and so was the boat.  We had sailed Strider over 2500 miles since March, learning its strengths and weaknesses and performing many hundreds of hours of maintenance.  Though the “to do” list on a sailboat is never complete, we headed to sea with great confidence in our little ship. 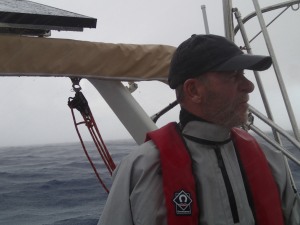 Our first dawn found us entering the Gulf Stream, and Ben wasted no time tossing out a lure.  Within five minutes the reel was hissing, and the fight was on.  The fish made four long runs.  Ben had to clamp a towel around the rod and line in a desperate bid to keep our gear, as twice his adversary took all but a few inches of backing from the reel.  After thirty minutes and many blisters, he finally gained the upper hand, hauling in a beautiful 40 pound tuna.  This turned out to be the first of several fish Ben caught during the passage, including a juvenile blue marlin and four Mahi Mahi.  With our freezer full of tuna steaks we released all the other fish except a single Mahi Mahi, but the anticipation of another epic fight kept us on our toes for the rest of the passage. 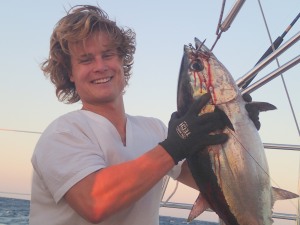 For the next two days we headed SSE, remaining west of a tropical trough with widespread squall activity.  At times we made good progress by skirting the edges of rain squalls, but for the most part the winds were light or on the nose.  Becalmed on November 5th we swam in 78 degree water, and we grilled tuna steaks on the stern.  Early the morning of November 7th the wind finally backed to WSW and filled, and with the trough dissipating we set an easterly course.  We did not want to get stuck below the rhumb line when the easterly trade winds filled, which would necessitate beating into wind and waves. 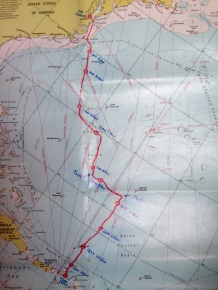 On 10 Nov we arrived at N2615 W6340, 465nm due north of Virgin Gorda, and we tacked onto a southerly course, but no matter how many times we scanned the horizon the easterly trade winds failed to appear.  With diesel running low we could not allow the boat to heel more than 15 degrees without sucking air into the line, starving the engine, so we sailed when there was some breeze and motored when there was not.  Meanwhile, the North Equatorial Current on our port bow slowed our progress and filled the sea with sargassum, which wrapped itself around our rudders and fishing lures.  We took consolation in the knowledge that the other Salty Dawgs were facing the same conditions, and many of them remained to our north and west.

Finally, the afternoon of November 13th, a mere 60nm north of Virgin Gorda, we exited the current, and as the sargussum cleared a light easterly trade wind began to fill.  Setting the gennaker we were soon moving briskly on a close reach.  At 2000 we sighted the lights of Tortola, and at 2230 we passed the west end of Anagada.  We crossed Sir Francis Drake Channel making 7 knots under the moon and stars, entering Gorda Sound and dropping anchor at 0140 on November 14th.  By mid-morning the next day we had cleared customs and picked up a mooring at the Bitter End Yacht Club.  Unsure how to prioritize things, we simultaneously went about making boat drinks, airing out the boat, and diving into the 80 degree water, all with equal enthusiasm. 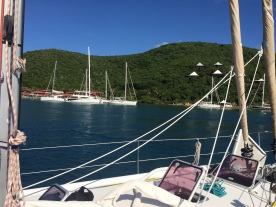 For all the time we spent before our passage contemplating heavy weather and at-sea emergencies, our 1400 mile sail proved pretty placid.  We tested our fuel management skills more than our sailing abilities.  So, was it boring?  Not really.  For one, after the initial 48 hours we settled into our four-hour watch routines, which kept us busy either working or sleeping.  Some of our biggest challenges were in the galley.  A chicken pot pie inconveniently adopted the consistency of chicken soup, which a wave slopped out of the casserole dish and into the silverware drawer, filling it with broth and potatoes.  More problematically, tuna blood leaked from ziploc bags in the refrigerator, and after two days the blood turned rancid.  The foul smell pushed Colin over the edge, and he was relegated to staring at the horizon and occasionally throwing up over the side until John volunteered to disinfect the refrigerator with boiling water and bleach. 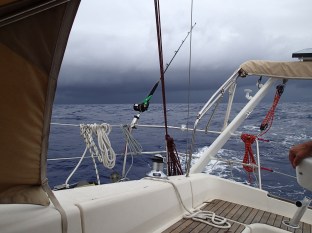 As expected on a longer passage, we also faced some minor mechanical issues.  Lines chafed, water filters clogged, and the depth sounder shorted out.  Most critically, our first night at sea the steering cables jumped the shivs when we snagged a heavy, industrial-sized plastic bag with our port rudder.  After disconnecting the wheel from the rudders we elected to continue under autopilot and emergency tiller.  John found that the fish gaff served as a perfect tiller extension, and we spent many hours hand steering.  This not only proved our “saltiness,” but it also helped us feel the boat’s balance and prepared us in case the autopilot failed, though this never happened.

Fortunately, the challenges were more than offset by the uplifting moments.  We witnessed many a beautiful sunrise and sunset, along with sightings of rainbows, turtles, and porpoises.  We all saw the green flash, and John spotted it twice.  We were treated to a moonbow, with all the colors faintly visible in the darkness.  During a rain squall with lumpy, confused seas, an especially playful pod of dolphins visited us.  They seemed animated by the conditions, as they repeatedly leapt at our side throughout the squall.  On another occasion we were visited by dolphins on a moonless night.  As they swam alongside the cockpit we could hear them breath, and we could dimly perceive their shapes by starlight and phosphorescence in the water. 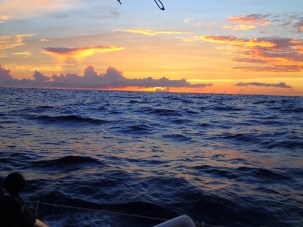 The biggest treat of our passage was simply spending eleven days with a great crew.  Everyone pitched in, no one ever complained, and we lifted each others’  spirits with good humor.  John showed a knack for finding great music on late-night AM radio shows from Cuba and the DR.  Ben told stories about his adventures sailing in Greenland and wrote hilarious chapters for his upcoming novel, reading them aloud to our delight.  Blaire and Colin simply enjoyed being part of the crew while taking a break from their parenting roles.  We will not hesitate to sail another long passage if we can hand pick a crew like this one.  A big thanks to John and Ben, and thank you to grandmother Sheila and aunts Ery and Galen for making it all possible! 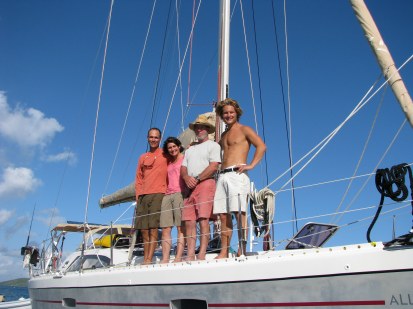 1 thought on “The Passage South”