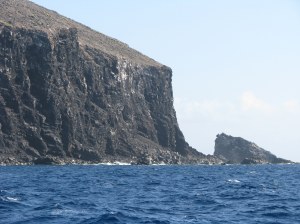 Isla Redonda: not a sandy beach in sight

Challenging destinations brought rich rewards during our recent visits to Saba, Statia, St. KItts, Nevis, and Montserrat. The first hurdle was simply sailing to these islands. With the winds constantly on the bow from Vieques to Guadeloupe, we sailed 320 close-hauled miles in order to advance 240 miles to windward. There were some long days, but it was more fun than motoring or working in the office.

Sailing upwind from Saba to Statia and St Kitts 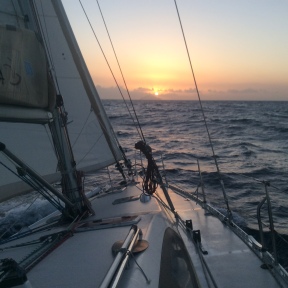 Sunrise over Redonda, beating to Montserrat

St. Kitts and Nevis offered respite for Strider’s weary crew: beautiful white beaches, shops, and well-kept historical sites and museums. We were charmed by Nevis, where the bustling energy and local character felt more genuine than Basseterre, St. Kitts, which was friendly but also host to cruise ships and high-end resorts. In Charlestown, Nevis, we visited Alexander Hamilton’s birthplace. We gained a new perspective on the founding father, who, as a poor immigrant from the Caribbean, felt most at home in cosmopolitan New York. He was arguably more American than his contemporaries, whose identify and allegiance lay with their home states. We wondered at how a boy who grew up amidst sugar plantations become active in the anti-slavery movement upon his arrival in America.

Owen hits the bar for a ginger ale and some Wifi

Statia and Saba from Brimstone 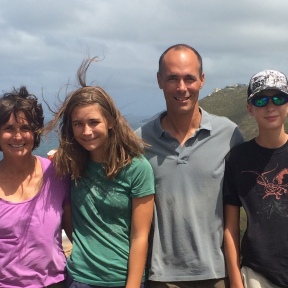 The islands of Saba and Montserrat share less than a 1/4 mile of white, sandy beach between them, but they were the family’s recent favorites. Owen shares his impressions of Saba, here. Megan writes about Montserrat’s volcano and its history, here. What is special about these islands? They offer a sense of adventure: anchoring in deep water exposed to wind and waves, maneuvering the dinghy to a pier between large swells and setting a stern anchor to keep the dinghy safe, and hiking over steep, rugged terrain. Both islands are beautiful, with vistas of mountain peaks set against wind-swept seas and intimidating views of white surf grasping at jagged cliffs. They reward sailors with a more secluded, less-commercialized experience; few cruising boats visit these places, and cruise ships are unknown.

Saba and Montserrat provide a valuable perspective on the relationship between man (or woman) and nature. For centuries Saba held development at bay, forcing its residents to climb hundreds of stone steps merely to carry life’s necessities to their hilltop homes.  Today it yields to modernity, with a tiny harbor enclosure, airport, and automobiles, but it does so begrudgingly. Sabans still build their roads and houses with the respect that is due this steep, rocky outpost. Meanwhile, Montserrat has spent the last 18 years teaching humanity a lesson about the power of nature. Beginning in 1995 Mount Soufriere’s eruptions destroyed the capital of Plymouth and the airport, forcing the evacuation of the southern half of the island. People lost their homes, belongings, and jobs, and they spent months or years living as refugees. Ultimately, more than half the island’s residents emigrated, and the remainder squeezed into small settlements on the north half of the island. These are the visible consequences, but life was certainly disrupted in other ways, too. One can only guess at the cost for marriages, families, and mental health, not to mention the basic opportunity costs for people who missed the chance to attend school, work, and accumulate savings.

Megan contemplates what has been left behind

Nature has reclaimed homes in the exclusion zone 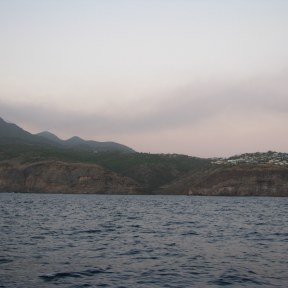 People have crowded into villages in the north, living under Soufrierie’s smoke and shadow

On the other hand, the greatest lesson we learned on Saba and Montserrat concerns the enduring strength of small-island communities. We wrote of this in our last post about Saba, where people of diverse cultures and ethnicities have built a community that is orderly, inclusive, and remarkably cohesive. On Montserrat one can only marvel at the strength of people who have faced wrenching changes and uncertainty. They have lived in school classrooms and churches, taken each other into their homes, and constructed temporary housing and government facilities, determined to endure until things returned to normal. Then, as Soufriere defied scientists’ predictions and continued to erupt, people came to accept that the changes were permanent. Now they are building new homes, new communities, and new lives. Through it all, they are unfailingly friendly and optimistic. They honk their horns, wave, and call to each other by name. “God bless,” they say to both friends and strangers, and “God provides,” they explain to those who wonder how they can be so upbeat.

Joe Phillip makes a living providing tours of the affected areas. He talks with Colin by a hotel pool. 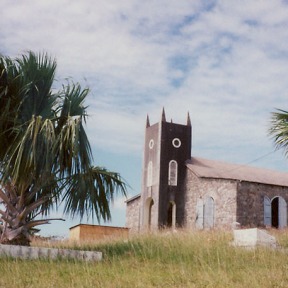 Churches served as emergency shelters, and they continue to serve as community centers.