After a day of water slides, pizza, and Ben and Jerry’s, we departed the Atlantis marina in Nassau and headed for the Abacos.

We sailed through the night, arriving at Green Turtle Cay the next day. We visited New Plymouth, a friendly town with colorful flowers and freshly painted homes. A memorial in the village center proudly proclaims the settlement’s Loyalist heritage. 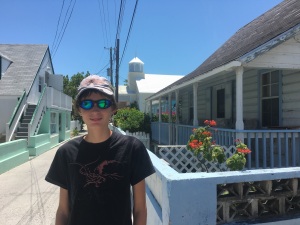 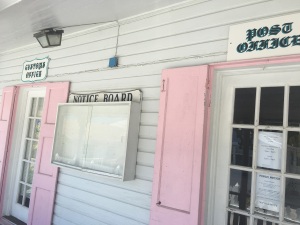 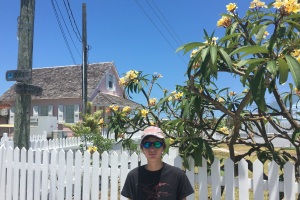 After buying fresh fruits and veggies, we dinghied north to Brendal’s Dive Center, near the Green Turtle Club. In the early 1980s Brendal worked out of Small Hope Bay, on Andros, where he was my family’s favorite dive master. Since then, he has earned an enviable reputation as a scuba instructor, spokesperson for Bahamian tourism, and a marine conservationist. He organized the first lion fish derby in 2009, a practice that has spread widely as people try to confront this invasive species. If you’re in the Abacos, I highly recommend diving with Brendal. 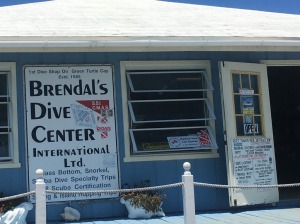 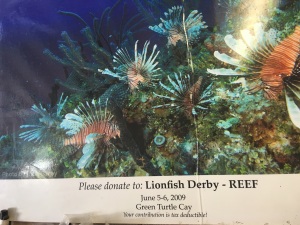 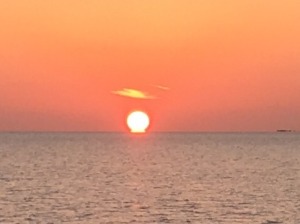 Green Flash in the Abacos

On April 30th, after a good night’s rest at Allan’s Pensacola Cay, we slipped through the Moraine Cay Channel and set sail for northern Florida, the Bahamas sinking below the horizon. We caught a small tuna, and a pod of porpoises played under the bow. The breeze filled from ESE at 17-20 knots, and we made good time under a full main and gennaker, despite a back eddy current working against us. During the night the breeze clocked south, and we unfurled the jib to windward. Morning found us 80nm east of Cape Canaveral, a respectable first day’s run of 136nm. 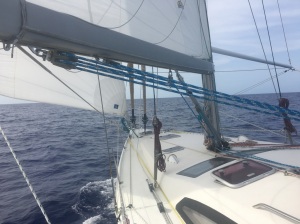 Reaching with the Gennaker 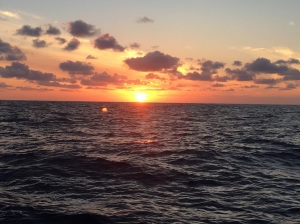 Running with Jib to Windward

Now we found the Gulf Stream’s core, and though the wind decreased to 6-8 knots, we made 8 knots over the bottom. However, the wind also backed to East, and this presented a dilemma. If we ran west for Fernandina Beach the apparent wind would be insufficient to keep the sails full, and we would have to motor the last 80nm. We opted to make for Charleston instead, riding the Gulf Stream north on a beam reach. Once again, the wind built during the night, and with Strider reaching at 7.5-8.0 knots, we made 10-11.5 knots over the ground. By morning we had covered 208 nm in our second 24 hours at sea, and we could almost taste the grits and collard greens! Alas, at sunrise the wind abated. Then a line of squalls forced us to run off to the northeast, after which the wind died completely. By the time we motored clear of the Gulfstream, the current had swept us farther east than we intended. 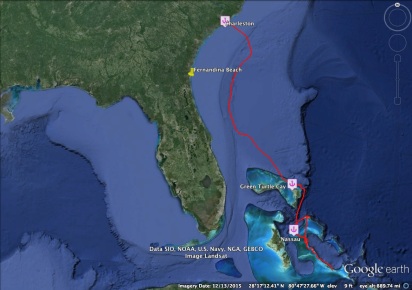 To add insult to injury, at midday we hooked two beautiful Mahi but lost them both. The biggest, a twenty-pound bull, knocked from my hands the rum that was intended to knock HIM out, the entire bottle falling into the sea. Then he wriggled his way off the gaff hook and made his escape.

Fortunately, the remainder of our passage went smoothly. A gentle evening breeze swept us into Charleston, and in the darkness Owen steered us down the shipping channel, avoiding three big freighters on their way out. We anchored behind a sand bar for a few hours rest, and in the morning we motored to our marina slip, where two U.S. Customs officials awaited us. Despite having nothing to hide, I never look forward to these inspections, but the agents were friendly and professional. Minutes after they left Strider, a line of thunderstorms swept through the harbor. Our timing was perfect, after all. 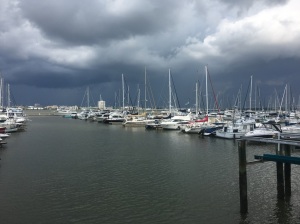 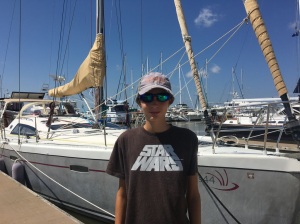 3 thoughts on “Ben Franklin’s “River in the Ocean””